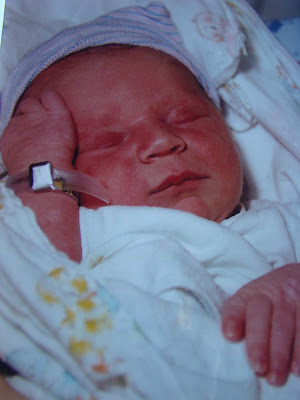 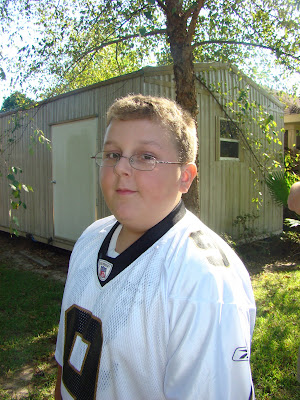 I cannot believe that 11 years have come and gone. It seems like only yesterday I was holding my first born child in my arms!Caiden will and always will be a blessing to Jerry and I. God had a special plan for Caiden, and Jerry and I are so ever grateful to the Lord for giving us a gift, and this gift has forever changed our lives. There were so many nights that I prayed for a child. Trying for 5 long years, I had almost giving up in despair. Wanting a child so much, and not knowing how to deal with the disappoint of trying and not succeeding, I was ready to give up, BUT, after I prayed to God, in your time, your time, I will wait. And when I gave it to the Lord, in turn, He finally blessed us with Caiden! Being a parent was all I ever wanted to be! Thank you God for my Caiden! 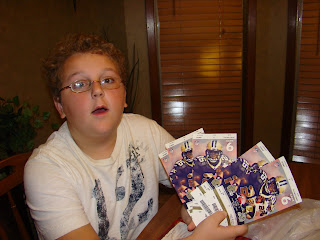 Today was a most fabulous day! Caiden did not go to school today. We have always allowed our children to miss school on their Birthday. Jerry and I feel that their Birthday is a day that should be spent with family. This is very important to us especially since Jerry is gone most of the time working. This is a family tradition of ours. And we will keep doing this, now whether Caiden and Bailee want to do this with their own family is up to them, but for now, this will be the way it is!! 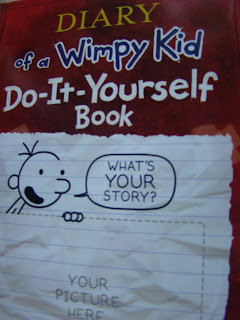 Caiden woke up this morning with a serenade of "Happy Birthday" with the wonderful(YEA RIGHT) singing voices of Jerry, Bailee and me! He was happy to hear it, but he said"Ok you guys, I need something to drink first!" Then we all sat at the dinner table with his gifts. We wanted him to open them while Bailee was there, for Bailee unfortunately had to go to school. But she understood, for when her birthday comes, the roles are reversed, and she understands. With Caiden becoming older, we are allowing him to have a say so in his choices of Birthday parties. Caiden is at a hard age right now. He is in between of having kiddie birthdays and of having something different. I with me being of creative mind, I am always thinking of different themes and different things to try and do. So, this year, we gave him this to think about. We told him that he could have the same thing as always, a party with friends at a local place, OR, he could have a special weekend with a friend, what ever and where ever he wanted to go, and it would be a big deal with one special friend. So, he decided against a usual birthday party, and chose this. Jerry told Caiden that he could take one friend, and go to the Super dome to see the New Orleans Saints play! OK, if you were an 11 year old boy, and had the chance to see a Pro football team play, which would you choose?? Not a hard decision to make. How many 11 year old boys get chance to see that?? Not many I know of!! You can have a birthday party at home anytime, BUT it is a once in a lifetime thing to see a game like this!! In the SUPER DOME!! 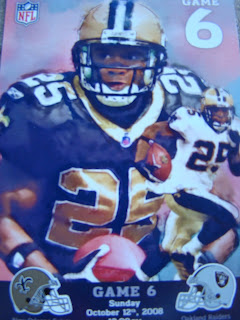 So, this is what Caiden decided to do! We have been planning this for weeks, and Jerry told Caiden that there was a chance that we might not get the tickets. For the Saints games have been sold out for the last year and a half! This was going to be a challenge, but Jerry promised Caiden that he would try real hard!! Caiden decided to invite his best friend Bo. Bo and Caiden are forever trading baseball and football cards. They are 2 peas in a pod! So, patiently Caiden has been waiting and waiting, and Bo too! That is all they have been talking about for weeks. Jerry put in some vacation time for Caiden's birthday. He has done this ALWAYS since he started working for State Farm. He always puts in time for Caiden's and Bailee's birthday! Jerry called Tuesday night and told me that he got the tickets!! YES!! I was pumped up ! He got 5 tickets, four for our family, and one for Bo. 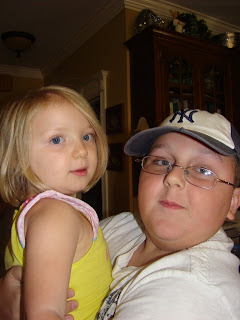 But, He told me not to tell Caiden, he wanted it to be a surprise! He talk to Caiden like he does every night, and told him that he was sorry, he tried real hard to get the tickets, and he just couldn't get them. Caiden was devastated, and I felt bad, but Jerry wanted him to not be expecting it, so it would be such a big surprise. I called to call Leslie, Bo's mother to let her know what was going on , so Bo would not give his hopes up either. She understood, and played the game out! 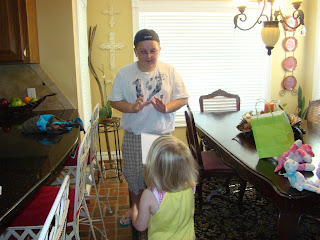 So, Wednesday night, Jerry and I decided to hide the tickets in a book that Caiden has been wanting! He has read this series of books called "The Wimpy Kid" and a new book had just came out and he wanted the book so bad. Caiden's school had their annual Book Fair last week, and when I ate lunch with them Friday, I snuck down to the library and got the book for him! 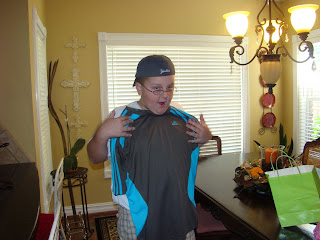 So, this morning when he opened his presents, he saw the new book, and was soo excited that he had gotten the book! We told him to look through the book, AND he found the tickets!! The look on the kids face was soo touching!! Those little dipoles in his checks got so BIG!! he was jumping up and down! He said, "Daddy, you told me that you couldn't get them, But you did, like you always say, you always promise , you always come through!" 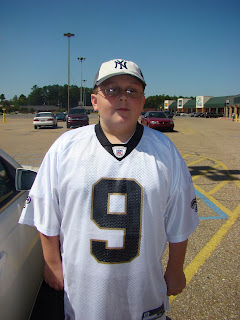 So, Of course, he called Bo to let him know that we got the tickets and we would be going! Bo was pumped up and was excited about going! 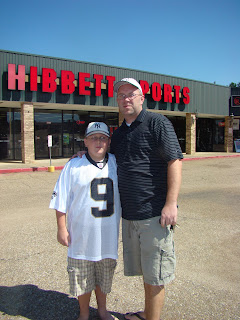 I fixed Caiden his favorite breakfast, Bacon and Eggs, and we started getting ready for his special day! 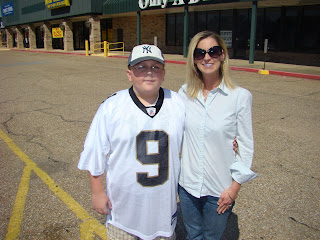 First thing, Jerry and Caiden went to the local Barber shop and got a haircut. After that , we went out favorite Bakery shop, Zoey's and picked out a cake for our special trip this weekend, The Saints game is next weekend, but we had a special weekend planned for this weekend too!! Wow, 2 weekends of fun! 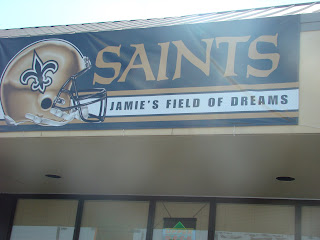 After we picked his cake out, we then went to his Kay Kay's (my mother) house to get his gift. We also got to his my niece, Isabel, who we haven't seen in awhile! She was so excited to see him. Caiden even took time to read her a couple of books, and it was so sweet to watch the sitting on the couch reading. Caiden LOVES to read! Kay Kay gave him money, which was so great for Caiden knew already what he wanted to buy with his birthday money... A Saints Jersey!! So, we then headed to Bastrop, to eat lunch at Granny's Home Cooking Restaurant. When then went to a sports shop to look at Saint's Jerseys. Caiden found one, and was really excited about getting it. What was really cool was that the money that Kay Kay gave him was the exact amount of the Jersey! Thanks Kay Kay, Caiden loves you so much! 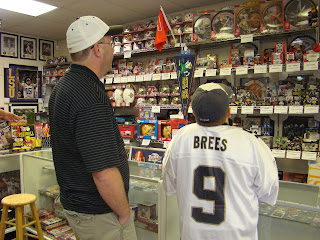 We then went to the mall to Jaimie's Field Of Dreams. This is a speciality shop of sports memorphila. This place was soo cool. They had baseball and football cards. Signed Jersey's and Footballs, and many many more things! Caiden was in heaven! 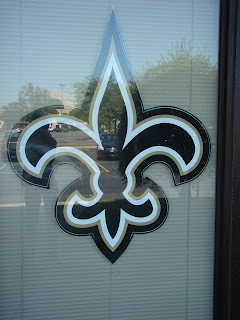 He bought a LSU card, and The owner gave him a Saint's card free since it was his Birthday! 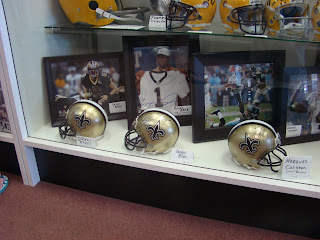 Caiden and Jerry were like 2 little kids in a candy store. It was so precious to see them like this! 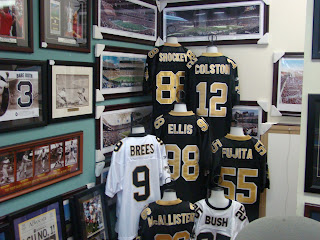 I was impressed with this place also, for they had soo much LSU stuff and I was going crazy! 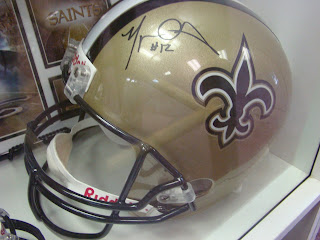 I wanted to get things, BUT this was Caiden's day, not mine! LOL 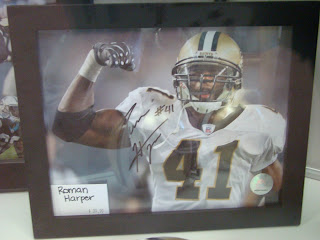 After we left there, with many football memorphilla, we headed to the school to pick up Bailee Grace. 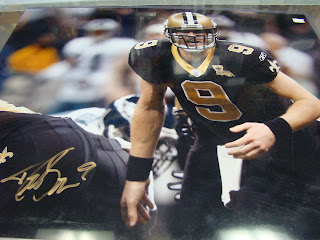 We got home relaxed, did their homework, and studied for tests. 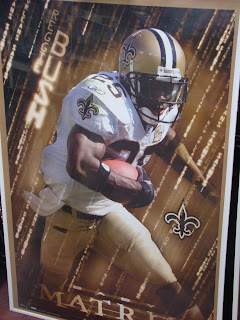 Even though it was Caiden's Birthday, we need to keep up with our normal routine, and our study schedule! 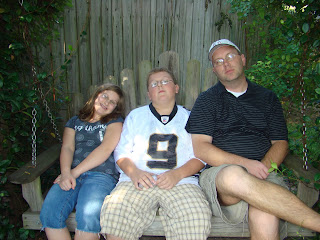 We then got ready for Caiden's Supper , and he picked Pea King, his favorite restaurant. 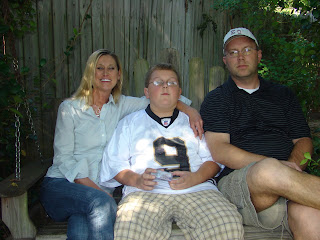 We had a great supper, and we were ready to come home 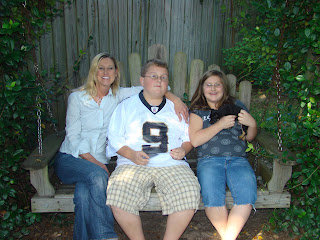 Caiden thanked Jerry and I for a Great Birthday! 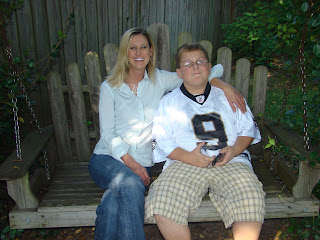 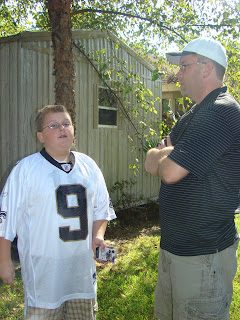 So will have this weekend at Caney Lake, spending 2 nights in a great cabin, playing games, camping out, weenie roasts, and bonfires, with smores and who knows whatever else we decide! 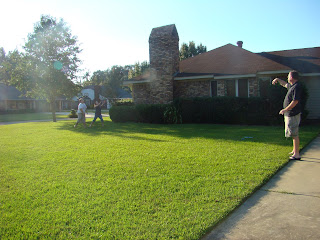 Then, Caiden, Bailee, and I, along with Bo, will travel to New Orleans next weekend for the BIG game of the Saints vs Oakland Raiders. 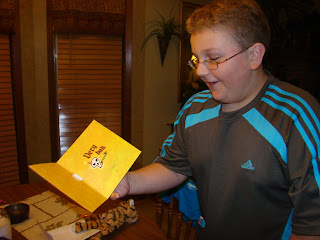 Caiden is soo excited about the next 2 weekends! We ended his birthday with coming home from a great supper, and coming home and finding a Birthday Card from his best friend Bo! We are ready for this weekend and the next weekend to come! Happy Birthday Caiden Max Ellerman, Your family loves you so much! You have brought so much joy into our lives just with your presence!