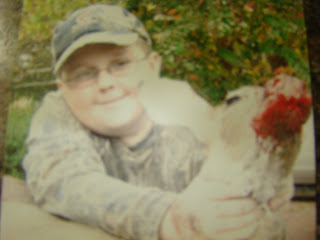 I love to hunt! One of my families hobbies is hunting. My dad was a big hunter. I love the game room at my mother's house. She has my father's deer he killed before i was born hung on the wall. When i look at it every time I go in there, it feels like home to me. Somehow when I look at it, i feel like he is right there beside me, it makes me feel like i really knew him, even though i really didn't have "time" to really really know him. Caiden showed some interest in hunting about a year ago. My brother Chad, had talked to Caiden many times about deer hunting. God bless Chad for always finding time for Caiden. He treats him like his son. Chad and Caiden finally found some time to go "Deer Hunting." I was scared because accidents happen during hunting season. A friend of mine lost her son due to a horrible accident. I trusted Chad and after saying many prayers, I let Caiden go. I was working at the time and I got a call on my cellphone at about nine thirty that morning. It was Caiden. I really didn't know how to respond when I saw his cell number on call id. So many thoughts were going though my mind, was he hurt, was Chad ok? I answered and i was relieved to her his voice. He proceeded to tell me he was ok, and that Chad and him had killed a deer!! His first hunting trip and they killed a deer! Caiden was so pumped! I was so happy for him! Chad and Caiden took the deer to the house for the skinning. Chad told me that Caiden was in a trance when they were cleaning the deer. He made sure he didn't miss a thing! It was a wonderful thing for him to experience. Thank you Chad for being there for Caiden and making it memorable!! I love you!
Posted by Danielle at 10:48 PM No comments: 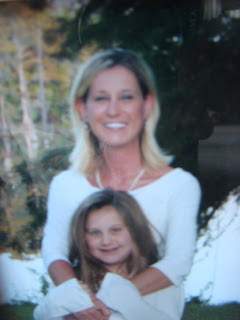 Bailee Grace is definitely a gift from God. She has really blessed my life. I remember when i was pregnant with her. Before i knew it was a girl, i wouldn't have minded having another boy. I am so glad it was a girl! i would have missed out on so much! I look forwarded to establishing a strong, mother-daughter relationship with her. We both have so much to experience together. She loves when i take her shopping. She also loves for me to take her to get her nails "done". I for sure can't wait for her to experience one of the greatest things of all...The miracle of giving birth. She will one day know how i felt when she was born!! She is a product of me, she is my daughter.
Posted by Danielle at 10:21 PM No comments:

PROGRESSION OVER THE YEARS 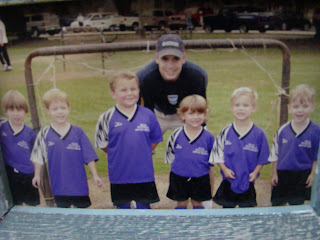 I thought it would be neat to post some of Caiden's sports pictures from the past years. It is amazing how much he has changed! I love the fact that he has played and experienced just about every sport. I am seeing now that the older he gets, the type of sport, and the number of sports he plays somewhat changes. Enjoy! 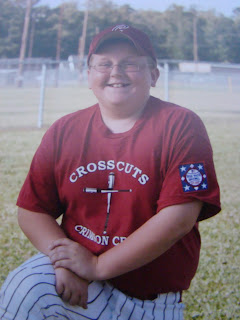 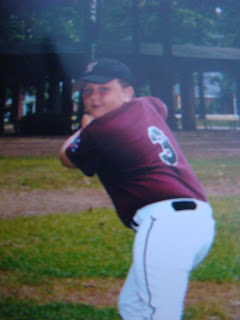 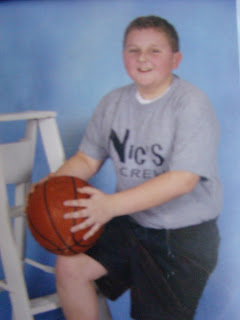 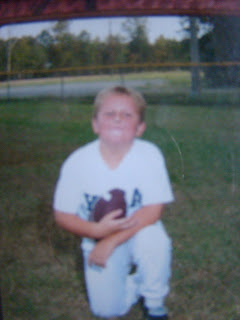 Posted by Danielle at 9:51 PM No comments: 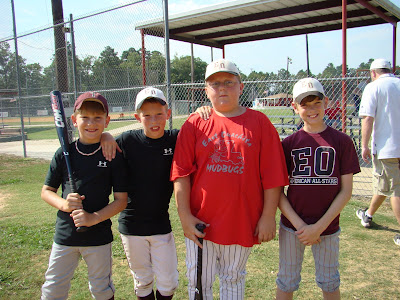 Posted by Danielle at 7:14 PM No comments: 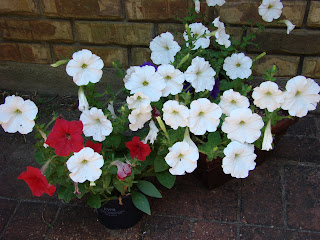 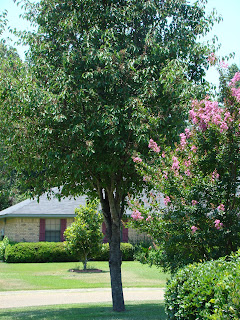 Our family had planned a nice and relaxing trip to Caney Lake. I was ready to just sit back and enjoy nature and spend some quality time with the family because we have been "balling it" for the past couple of months. We had planned to go earlier this week, but to no surprise, all-star practices have began! So, we have postponed our camping trip till August. It worked out for the better my birthday is in August, Happy Birthday to ME!! Even better, we are going to Lake Claiborne instead!!! My favorite place!! I can go camping anytime, but ALL-STARS is a once in a life time thing!
Posted by Danielle at 1:11 PM No comments: 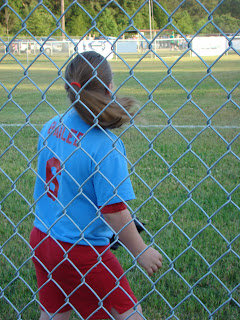 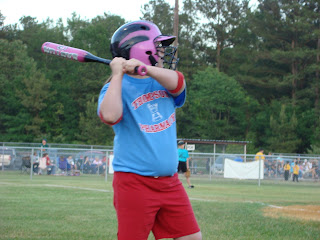 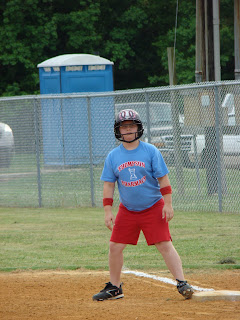 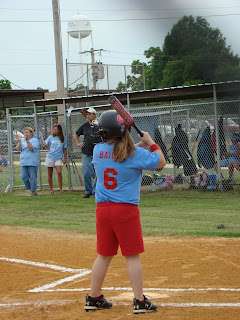 Bailee had great time playing softball this year! she is not sure that she wants to play next year, but i want her to find her hobby and excel in it. We will see, Bailee changes her mind quickly and she suddenly finds that maybe "I will do it" after all !
Posted by Danielle at 12:50 PM No comments: 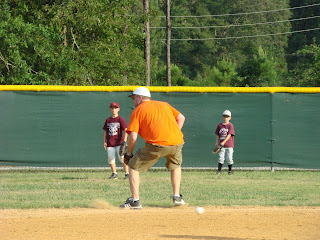 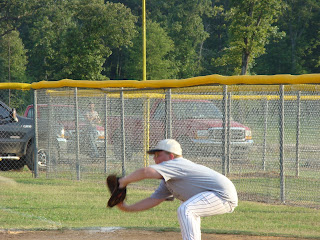 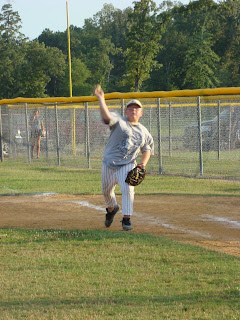 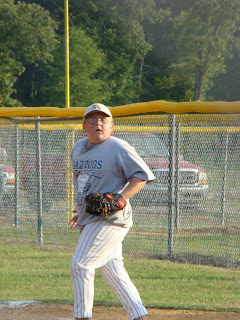 All-stars are the best of the best. These boys were chosen based on many areas of baseball. We are here to win.That's why we have all-stars, but at the same time, it is about having fun, developing character, and about making new friends!
Posted by Danielle at 12:28 PM No comments: 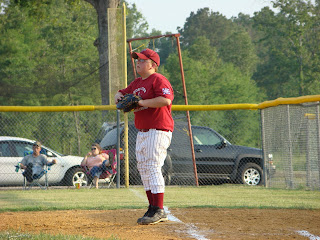 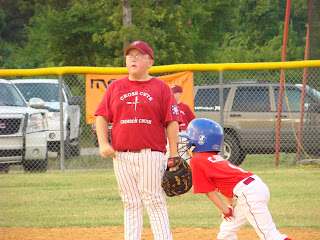 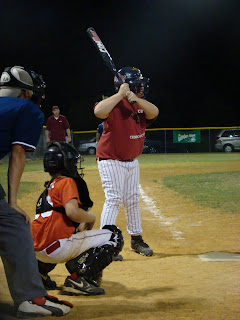 Caiden is passionate about a lot of things, he loves to pick up a book, all covered up under a blanket, and READ. Caiden's love for baseball surpasses all other interests right now. He is so focused on being the best he can be at the game. He is always looking for new ways to learn and how to use new techniques that others have taught him. His father is by far the best teacher of all!
Posted by Danielle at 11:41 AM No comments: 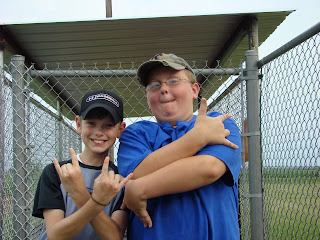 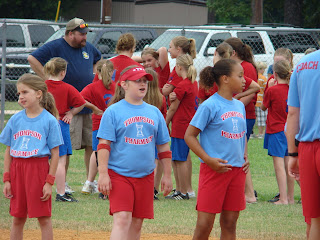 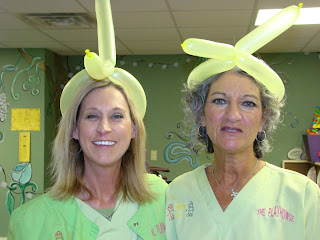 Our house is always filled with kids. Summer time is a great time for us to host more kids and to give them fun things to do. I'm always thinking of new things to try, cooking being one of them. I have always been bragged over for my cooking. I think I'm a great cook because I put my total heart into it. Nutrition is important to our family. We need to be healthy to perform at our best, whether it be ball, or just playing playstation three !
Posted by Danielle at 11:18 AM No comments:

THE ONE AND ONLY GAME BALL 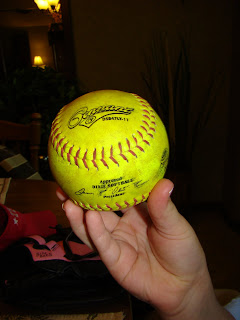 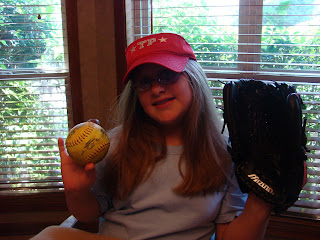 Bailee Grace played her second year of girls softball. She enjoys it but does not like to sweat! She gets it honestly, from me. She enjoys being with her friends most of all. Bailee would rather sit in the dugout talking about Hannah Montana, than cheering her team on. She had good moments and not so good, but for the most part, she really did great!! We had a very tight game last week and the score was tied 3 to 3 . We were up to bat, with two outs, last inning. Bailee was up to bat. This was to be the end of the game. Bailee got up there in her cute little batting stance, and the first ball was thrown, and she hit it hard!!! She knocked the runner on third home and we won the game!!! Great job Bailee!! She won the game for us!!! She was so proud of herself!! She was going to get a prize for that! When the game was over, we got in our usual team circle. The coach congratulated the girls on a win well deserved. Then the coach called Bailee's name to come to the front. The coach handed Bailee that pretty yellow softball and said that she was the reason they won and the deserves the game ball!! So proud of her! What makes this so special is that that was the first and only game ball given out the whole season!! No one else has one! What great accomplishment for my Bailee! This is something she can tell her children when the time is right!
Posted by Danielle at 9:31 AM No comments: 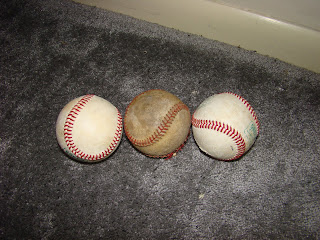 There have only been a small number of boys that have hit home runs in our 9-10 year old league. Caiden is one of those boys!! Man, when he it that first home run, i cried!! it was one of the most exciting moments in my life!! i was so proud of him! It was cool to see him run the whole bases, his teammates right there to give him high-fives!! Man, what an awesome feeling!! Caiden's home run was the topic of school chit chat at school the next day! He was so pumped up when he came home that day, he told me that everyone, even teachers, were proud of him!! I haven't even got to the part! Caiden hit the most home runs out of the whole season!!! Way to go Caiden, mom and dad and Erin are soo proud of you! Jerry and I even had a trophy made for him!! Caiden just keeps amazing me how talented he really is. Keep reaching for the stars Caiden!
Posted by Danielle at 9:08 AM No comments: 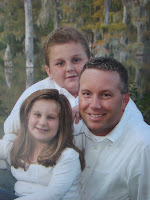 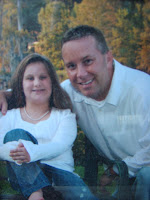 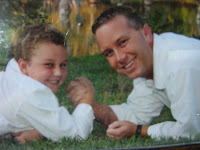 When Jerry and I were wanting a child, we prayed to God to make us the type of parents he wanted us to be. We wanted a family that was surrounded by love, trust, and more love! I am so blessed that Caiden and Bailee have a father like Jerry. He really takes his job as a father very seriously, Jerry's morals are of the utmost, and he wants to set the right examples for our children. We want raise our children under the influence of our Lord. Parenting is a great Gift from God. He allows us to mold and shape their character, but God is the one who really makes them the way that He wants. We are just the vessels, He is filling up that vessel. Thank you God for picking Jerry to be my children's father. He is the best dad in the world!! Happy Father's Day !!
Posted by Danielle at 8:54 AM No comments: